Photo du Jour: A Message from Cochin to the Middle East

My cousin sent me this beautiful photograph (click to enlarge) that he snapped during his last trip to Jew Town, Cochin. 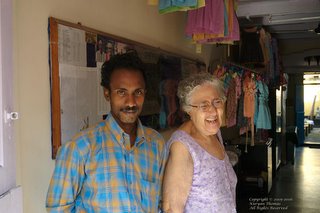 Here's some context to this photograph. The old lady is the oldest *white* (Paradesi) Jew in Cochin (there's 6 left, including her). Her husband is dead, and everyone but her brother have immigrated to Israel. The guy in the picture is a Shia Muslim who looks after her. Here's some more context from my cousin's e-mail.

She told us that this guy and 2-3 other Muslim street vendors are her "family." They look after her, do her shopping, help her in the store, etc. She said they don't ask for money; it's just respect, and she helps them out in return. "What does it matter that they are Muslim and I am a Jew," she said.
...
She's been to Israel many times to visit her sister, but she doesn't like it there ("I'm a Malayali, what can I do in Israel?") so she always returns.

Every time I feel despondent about the wretched state of Kerala's economy, it's useful to be reminded of the exemplary religious tolerance that prevails, which offers a lesson to a lot of places around the world, most of all to the middle east.

There's also some additional trivia about the Jewish community in Cochin.

There aren't enough "white" Jews to achieve a quorum for services at the synagogue any more. You need ten males who have done bar mitzvah. So what they do is, they call "black" Jews (descendants of the already-then-extant Jewish community, which, according to tradition, dates back to the time of King Solomon - Source: Wikipedia) on the mainland to come over and reach a quorum. There are only very few - 6 to be exact - white Jews left, but there are hundreds of black Jews in Fort Cochin, Mattancherry, and Ernakulam.

I also blog at the
Indian Economy Blog
IPEG Blog