Some of you may have noticed that India's phone subscriber base has now crossed 100 million. I remember the mobile subscriber base in India being about 1.5 million when I left India in 1999, compared with 55 million now. The telephone was introduced into India in 1881, and in the 118 years between 1881 and 1999, India added about 25 million phone lines. In the six years since, the country has added 75 million new phones, driven mostly by spectacular growth in the private-sector dominated cellular sector. I don't really need to say much more about liberalization, do I? The graph below (compiled from my own research) illustrates the point even better. 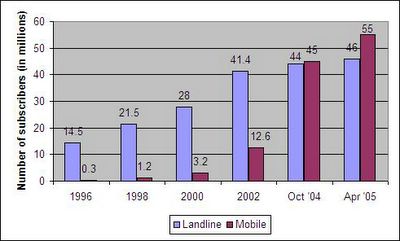 For the record, China's subscriber base is in excess of 600 million. That and India's teledensity of 9.13 (compared with China's 50-ish) are sobering statistics indeed. There's clearly a great deal more to do, but for now, 100 million is a number worth savouring.

PS: I fully expect the civil aviation sector in India to take off in a similar fashion if two conditions can be met -- 1) the caps on FDI in the aviation sector are removed or at the very least liberalised and 2) planes are available to cater to the additional demand.
[link] posted by Reuben : 9:11 PM

I also blog at the
Indian Economy Blog
IPEG Blog